Startup leverages real-time video inspection to save contractors and cities money during the construction permitting process.

What’s the cost of an hour’s delay at a construction site? The answer: about $1,000, if not more.

That hefty fee comes from equipment rentals, personnel and other charges contractors and developers pay during each minute on-site. Despite high rates, these delay costs don’t have to be so biting, says VuSpex Smartphone Inspection Solutions, a startup that claims its new cloud-based mobile app can expedite inspection delays with live streaming to government site inspectors — officials whose schedules are often backlogged.

Pennington explained that the app was envisioned in 2011 by drywall contractor Dane Demicell, the company’s founder, when a series of unforeseen inspection delays held up 30 people — including Demicell’s crew — across four different projects in a single day. Demicell had questioned why a more reasonable alternative couldn’t exist, one that would expedite workflows and cut the laborious drives of inspectors.

“Every single contractor has an iPhone or a smartphone in their pocket, and [Demicell] thought, ‘Why couldn’t this be used to assist inspectors to do simple inspections from their desktops?’”  Pennington said.

Ideas for the app germinated, and today, the company plans to unleash the app to hack the inspection process nationwide. It’s geared to enable contractors — who’ll pay for the service — to schedule various types of inspections, confirm them, and then let contractors follow up with real-time video inspections via video streaming and photo captures. After the inspection is complete, the app records the experience for easy reference later — each part of the app includes a way to simplify the process. 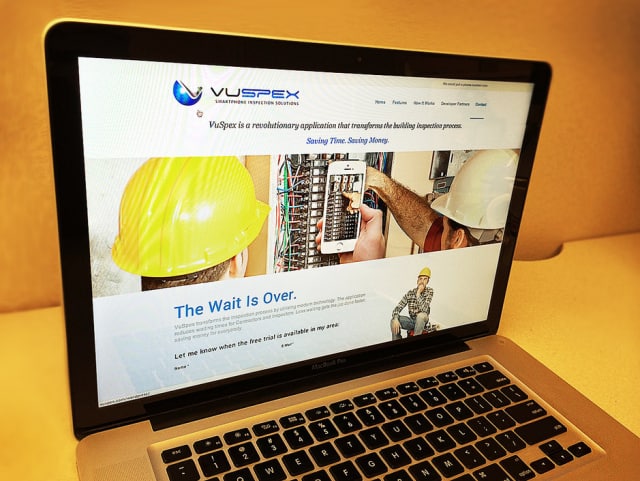 Though no official release date is listed, the VuSpex inspection app is soon expected to go live and be deployed in a few yet-to-be-announced cities.  Pennington said the company is planning for a big announcement later this month where additional details about the app and the cities using it will be revealed.

And in July. Vuspex was the grand prize winner at the 2014 Accela Construct App Challenge — a contest awarding $25,000 to the company and a lineup of other inventive startups.

“There’s been some really innovative solutions on what can seem like really mundane activities, like building inspections,” said Accela Technical Evangelist Mark Headd at the winner’s announcement event in San Francisco. “It doesn’t seem like the sexiest thing in the world, but [inspections] happen every day in municipalities across the country, and we rely on them.”

Pennington credited Accela for connecting the company with agencies and departments. A year and a half back, the company’s team had attempted to solicit the services by themselves and was quickly turned away. Governments had loved the startup’s initiative, but required a larger technology backer, a firm that could ensure the app’s tech was supported and maintained for the long haul. In fact, Pennington said they were told specifically to join a platform such as Accela who’d already made inroads into government.

“This was a huge thing for us that there was a company like Accela that could think in this way to open data up to improve service to agencies and citizens,”  Pennington said.

And as the product is gradually adopted by agencies and departments, new features are being drafted. Likely the largest of these will be the decision to open the service up to citizens who would be able to leverage the service for smaller permitting and construction projects on residential homes. If such a release happens, Pennington said it could spell a much larger growth opportunity. Considering water heater inspections alone, Pennington said they’ve estimated the company could have a customer base of up to 100 million people nationwide.

“We do see a much broader application,” he said. “Anything that uses video and audio streaming would be something that we’d consider developing.”

Fill out the contact form to request a demo or get more information about how VuSpex Mobile Video Inspections can save time and operating costs for Contractors, Building Inspectors, and their agencies.

VuSpex Mobile Video Inspections are a safer alternative for many types of inspections, helping to reduce interactions while providing you with essential tools in our modern age.

Contact us today to request a demo and get more information about VuSpex.